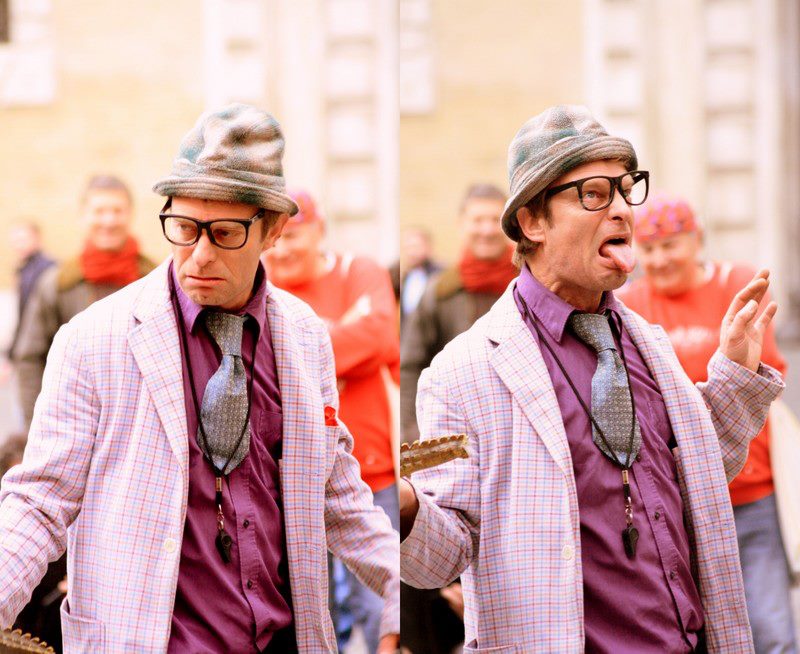 Actor, mime, clown of few words but many smiles.
"Hardcore streetperformer" as he likes defined himself.
He studied at Guildford School od Acting "GSA" and also at "Desmond Jones School of Mime".
Adrian made his first street show back in february 1988, in Covent Garden, in the heart of London.
From England, via the most important piazzas in Europe, finally arrived in Italy, where he partecipated in almost all Buskers Festival.
His show is a mixture of pantomime, improvvisation, simple and quick gags performed at a breathtaking pace.
With a box full of simple objects that take life, by using facial expression well constructed with interaction with passes by, giving life to a show of great comedy.
Always the same but at the same time always different, changing and adapting to the audience and to surroundings.
Not to be missed!

Adrian Show is suitable to people of all ages and is adaptable to any type of event.
To find out more you can download and read the technical requirements!

The artist has a selection of comedy characters:


Some of the characters about, were created especially at the water theme park "Le Caravelle", where Adrian has worked for many years.
Other are easily adaptable to other situation (birthday parties, weddings, events, festivals, functions etc)
On the PHOTO page you can find the pictures!
Fornito da